Evolution of Digital Banner Ads: From Flash to HTML5 Digital banner ads have played a major role in digital marketing since the first days of the World Wide Web.

They evolved through time along with the technology that allowed us to design and publish visual content online but there’s an important fact that never changed:

They generate leads, sales, increase awareness and help us grow our brands and businesses. The revenue per user generated by display advertising is constantly growing. If we’re to look at the stats from the last couple of years, we have solid proof on the effectiveness of banner advertising.

The growth is substantial.

The Internet before and after the first digital banner

Maybe you already know this fact, maybe you didn’t. The World Wide Web went live in 1991, a few decades after the whole Internet idea was first implemented. Back then, nobody really cared about the Internet. In fact, most of the people didn’t even know what Internet was and how useful it can become.

Everything has to start from somewhere. This was the context in which the first web page ever was launched at CERN and it looked like this:

For the next couple of years, the WWW became more and more popular. Domain names became accessible to anybody and millions of websites were being set up and launched every year. Thus, it didn’t take long for the advertisers to find out how important this new channel of communication can be. It was only the year 1994 when the first display banner was embedded onto a website.

And digital banner advertising, as a whole new industry, was born.

How did it all begin?

Well, the first company to pay for digital banner ads was AT&T. The web page that hosted the first banner was HotWired, the former website of the well known digital magazine from today, Wired Magazine. AT&T paid $30,000 for the banner to be displayed for three months on the website.

What’s incredible about this banner is that it had a 44% click-through rate which at today’s standards (0,06%) is closer to a miracle than reality. There was nothing special about the banner but it was the first. Moreover, it was clickable and easy to notice due to its colorful letters.

Another interesting fact is that the size of the banner was 460×60 pixels, a popular display banner size that is still in vogue today and probably will for a long time from now. It was placed at the leaderboard spot, at the top of the website, in the header area.

This made it more visible and therefore, more clickable.

The file formats that shaped the digital advertising history

In 1995, for example, WebConnect, an advertising agency, was already helping their clients target their banners online.

However, apart from the banner that was published by Hotwired, what did all other banners look like back in the day? And how did they evolve into what they are today? What were the most popular formats over their more than two decades history?

Well, starting with the first banner, the most important factor in the online advertising evolution was the technology. Banners evolved along with the Internet speed and the technological progress of computers.

Let me explain it in detail:

From static to animated or how technology influenced media

Those of you who got to experience the WWW in its early years, you know how slow pages used to load on a dial-up connection. Nobody could even imagine a video ad twenty years ago. At first, there were simple static banners, followed shortly by gif animations.

There were a few years when flash banners took over the Internet up until recently when the new HTML5 standards got into the spotlight. Static digital banner ads are still widely popular and they evolved as well during the last decades.

However, the most visible evolution was that of the animated banner.

When it comes to animation, historically speaking, we can talk about four major milestones in digital advertising:

How did the technological advancements influence the advertising industry?

Over the years, computers became increasingly faster and the web browsers, better at displaying different types of HTML codes and file types. The Internet access became widespread and with popularity, came a race between Internet providers who aimed at increasing the browsing speeds.

Also, different file types evolved along with the Internet speed up to the point that almost all restrictions were abolished.

At first, Gifs were the only way to display animated banners. The advantages of this file format are numerous but there were some disadvantages as well. There is a limitation in color tones and image quality when it comes to Gifs. This is one of the main reasons why advertisers choose to make them flashy and very colorful. They needed banners that were able to stand out from the crowd.

They needed banners that were easily noticeable by the viewer and at the same time, clickable enough for them to convert.

Example of a basic Gif banner

Another example of an animated Gif banner.

Flashy does not mean better. As you can see from the above examples, some of these banners got to be quite annoying to the audience. However, nothing is eternal and like most of the people, advertisers learned from their mistakes. And, once Flash was released, a new type of animated digital banner ads appeared.

At its time, flash technology was considered a breakthrough. And, for many years, it was the best environment for designing and scripting animated digital banners.

The digital banner design changed drastically once the flash technology was launched. It wasn’t the perfect choice but at that time, it was the best in terms of quality and versatility.

Flash was first launched in 1999 by Macromedia, a company that was later acquired by Adobe. One year later, the plugin managed to rule over its competitors, Java and QuickTime and took over the digital market, including the digital advertising market. Flash prevailed also due to the fact that starting mid-decade, it facilitated video streaming as well.

It was video streaming at a poor quality considering today’s standards but still, it was a huge shift in the way media was broadcasted via the Internet.

However, everything must come to an end eventually, good or bad. It happened with Flash as well and it wasn’t that long ago.

Many advertising platforms chose to ban flash banners, browsers lost their native compatibility. Flash is still available today as a third party plugin and it is still working on some browsers.

However, when it comes to advertising, it has exited the mainstream. Why did it happen?

The downsides of Flash:

After almost two decades, Flash is still alive but it seems that the plugin is living its final days. There are several reasons why HTML5 has replaced its almost defunct predecessor, especially in the industry of online digital advertising. Here are the most important of them:

This means that browsers were able to render flash banners one day and unable to do the same thing the next day, after a major update. Users needed to reinstall the whole plugin in order to keep the pace with the changes and secure their browsers and computers. Now, there are many versions of the plugin installed on users’ computers and some of them are quite outdated.

If you are unable to update your plugin and have to wait for a professional to do it, there are many times you will not be able to view flash files on your computers. This is a major setback for a marketer or an advertiser who cannot be sure if their banners will eventually reach the targeted audience in due time.

Here’s an interesting article from PCWorld on how the Flash plugin destroys your browsers. If you were not convinced yet about why regular users, marketers and advertising channels migrated away from it, this article will definitely do it now.

As you can clearly see, there are at least three major reasons why Flash is no longer the first choice for a digital banner designer.

Now, let’s move on to the next step in the digital advertising evolution, the HTML5.

HTML5: the start of a new era in advertising

HTML5 is not a new concept. The new Hypertext Markup Language has been around for almost 10 years. However, its official and final specifications were released in 2014. Since then, all browsers were updated to be fully compatible with it and marketers have begun to discover its true power.

Why is HTML5 better than anything else?

There are many reasons why HTML5 is now the new norm. Let’s take a look at the top four reasons:

What are the standardized digital banner sizes?

Before learning how to make a digital banner with HTML5, you need to understand first the basic concepts of digital advertising.

One of the most important such issues is how to choose the proper sizes for your banners.

If you are working with Bannersnack, there will be no problems as our tool allows you to design your banners using already made presets for all major social media platforms and of course, the most popular digital banners sizes.

In case you want to design them from scratch with another design tool, you should know that standardized sizes for digital display banners’ design exist almost from the first days of digital advertising. As we’ve already discussed in the opening paragraphs of this article, the digital advertising saga started with a 460 by 60 pixels banner.

More and more sizes were implemented in the following years, leading us to the present days when we are relying mainly on the banners sizes described in the above picture.

Digital advertising is an important part of our lives, whether we are marketers, advertisers or regular Internet users. We’ve learned together how everything started, when and where the first digital marketing banner was launched.

Over the years, the way we receive and publish digital display banners has changed several times. However, most of these changes were technology related.

The Evolution of Video Advertising: From TV Commercials to the Mobile Age

by Ana Darstaru4 weeks ago3 comments 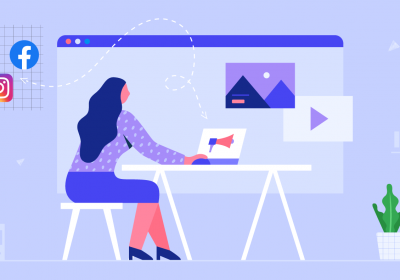 Get Started with Ecommerce Advertising and Take Advantage of Online Channels