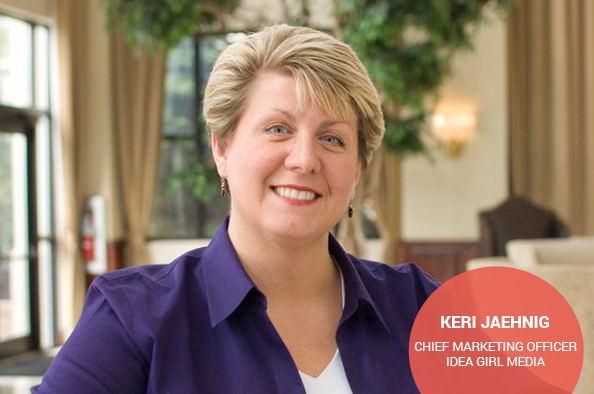 So far we discovered at the “Bannersnack Ad Talk” interviews that simplicity sells, that we need to test and compare the results, that we need to be a first mover and what is intelligent advertising. Today we discuss with a social media pro who is the Founder and CMO of Idea Girl Media, a Social Media Marketing Agency that works with business brands, public figures & non-profits to achieve social media success and positive online reputation. Her name is Keri Jaehnig and she received a 2013 Small Business Influencer Honorable Mention Award, and a commendation for Outstanding Attainment in Social Media from the Senate of the State of Ohio. Her insight has also been featured at Social Media Today, SteamFeed, Search Engine People, and AOL Small Business, as well as at Forbes and Business Insider.

She describes herself as a “Non-fat lattes, travel & quick wit make me smile, and I am always enthused to meet new people!“

“Social advertising was once optional. For those that want to be at the top of their class, it is now necessary. That said, smart social media platforms will keep the user in mind when making policies for quality of appearance, as without the user, there is nothing else.”

2. What are the most important 3 tools for you? (anything you use constantly for online advertising, or anything you think others should use)

“My niche is social media. So, my tools will support those efforts:

3. Could you name 3 best practices for advertising on Facebook for 2015?

First, in 2015 on Facebook, if you’re not investing in some advertising, your results will eventually be little. So, become familiar with options and plan to do some!

Second, boosting posts proves little value. The Power Editor will be your friend to create and track Facebook ads.

Third, target ads strategically. Create great content, then promote it to be in front of your fans. Additional fans can be earned through other methods, and waiting until you have the hang of the Facebook ads system to pay to attract new fans could prove most useful.” All You Need To Kick Off Your Christmas Promotion + FREE Templates

by Diana Guta2 months ago6 comments by Claudia3 months ago53 comments
Go to mobile version